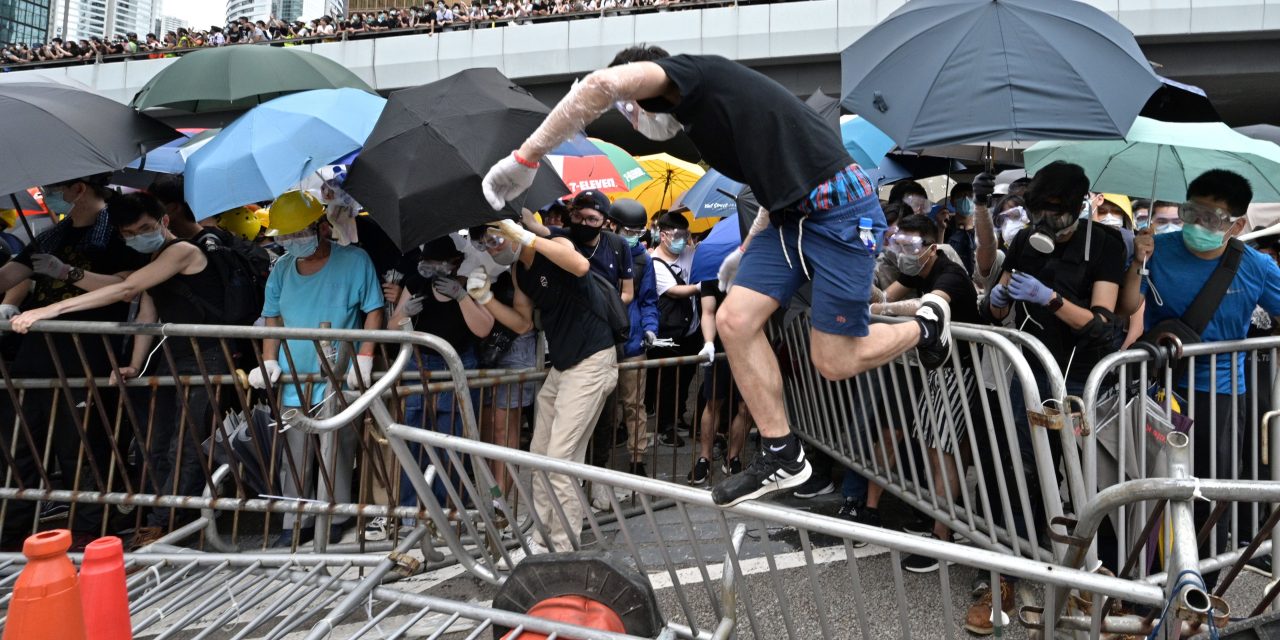 Hong Kong police unleashed rounds of tear gas and fired bean bag pellets at protesters Wednesday, dispersing large crowds that had assembled around the government headquarters and legislature to demonstrate against a proposed extradition law.

Local media reported that some protesters had stormed into the government building, prompting police to set off rounds of tear gas and smoke bombs inside the building, as well as outside.

Thousands of demonstrators had poured into the streets surrounding Hong Kong’s legislature Wednesday morning, choking major thoroughfares with barricades and human chains. The unrest prompted the government to abruptly postpone a planned debate over highly divisive amendments to an extradition law that would allow for fugitives to be extradited to mainland China for the first time.

The city has boiled over into massive protests in recent days as the government attempts to fast-track the controversial legislation. The proposed law has ignited fears about the former British colony’s continued autonomy—promised after its return to Chinese sovereignty in 1997—and critics fear that it will be used by Beijing to apprehend activists and dissidents.

Hundreds of young demonstrators staged an overnight protest Tuesday in the park abutting the Legislative Council, spreading tarps and sleeping bags over wet grass, undeterred by the bouts of rain. In the morning, they were joined by thousands more. At the height of the morning commute they commandeered police barricades and dragged them across key roadways to block access to the government headquarters.

Protesters said they wanted to signal to the government that opposition to the extradition bill was widespread. “We’re furious, we’re angry, and some of us are afraid, but we’re here anyway. This is a chance to do something important,” said Laurie Wen, 48.

The government is standing by the proposed legislation despite today’s protests and a massive march on Sunday through the heart of the financial hub. Chief Secretary Matthew Cheung made a video appeal for protesters to return home, but the crowds are defiant.

“At least I can say I came out and fought for the next generation,” says a protester who asked to be called Ms. Ho. She pitched a tent adjacent to the government headquarters and plans to stay there until the law is withdrawn, or police forcibly remove her.

A citywide strike was also called Wednesday, with trade unions, teachers, businesses and other groups taking to social media to circulate the appeal for a June 12 boycott. Further protests are expected in the run up to a vote on the bill slated for next Thursday. If it succeeds in coming before the chamber, its passage is all but guaranteed in a legislature dominated by pro-Beijing lawmakers.

The bill has provoked international condemnation. On Tuesday, U.S. House Speaker Nancy Pelosi issued a statement against “this horrific extradition bill.” The bipartisan U.S.-China Economic and Security Review Commission has also spoken out.

“The extradition bill imperils the strong U.S.-Hong Kong relationship that has flourished for two decades,” Pelosi said. “If it passes, the Congress has no choice but to reassess whether Hong Kong is ‘sufficiently autonomous.’”

Business groups in the city, including the American Chamber of Commerce, have warned the law could imperil the city’s standing as an international financial hub, and prompt foreign investors to withdraw.

“I do feel like it is a last battle,” said Chloe Cheng, a 25-year-old speech therapist. “I think if all these people come out and say no and the government still passes the law, it shows that they can and will do whatever they want.”

The extradition bill is the latest flashpoint in a city seething with frustration in the wake of recent efforts to integrate it more closely with China. Those efforts have included including the banning of a pro-independence party, the institution of mainland Chinese jurisdiction at a new high-speed railway terminus in Hong Kong, and the criminalization of mockery of China’s national anthem, which Hong Kong soccer fans frequently jeered at matches. Now the bill has become a showdown for the unique freedoms that continue to differentiate the city from the mainland.

The bill would make it easier for criminal suspects to stand trial on the mainland, where the conviction rate is 98% or higher. Hong Kong’s government says the legislative change will close a loophole excluding the mainland from extradition agreements and prevent the enclave from becoming a haven for criminals. But critics fear it will be used to stifle dissent and effectively legitimize Beijing’s high-profile, extrajudicial detentions of dissidents such as a number of publishers and booksellers in 2016.

“It is completely ridiculous and goes against the core values of Hong Kong…democracy and rule of law. If this bill passes, there will be no rule of law, and no democracy,” said Wong Yae Ching, 25, a protester.

The latest attempts to paralyze Hong Kong through acts of civil disobedience—with youth leading the charge—recall the pro-democracy demonstrations that shook the city during 2014’s “Umbrella Revolution.” That 79-day uprising began with calls to “occupy Central” and already Wednesday’s sit-in around the legislature is being dubbed “Occupy 2.0.”

“During Occupy Central 2014, we had said, ‘We will be back,'” Pro-democracy legislator Claudia Mo told the crowd to cheers on Wednesday. “Today, we say, ‘We are back.'”

Opposition to the extradition bill has galvanized an even wider segment of Hong Kong society, including groups that normally abstain from the city’s frequent marches and rallies. Business associations, housewives, lawyers groups, church leaders and even horse racing columnists have all vocally opposed the bill.

“It’s an identity issue for Hong Kong,” Antony Dapiran, a Hong Kong-based lawyer and the author of a book about dissent in the city, told TIME. “The government is threatening to take away part of those rights and freedoms that make up what they see as being part of the core identity of being a Hongkonger and I think that’s why it evokes such a visceral reaction from so many people… cutting across socioeconomic and other divides.”

Several people who said they had never joined a protest before told TIME they felt moved by the coverage of police clashing with protesters and trying to clear large crowds.

“We have to come out now because we may no longer have any chance to come out again,” said Lillian Lam, a 26-year-old grad student and first-time protester.

Authorities have reiterated calls for protesters to express their demands peacefully, but some say they have been left no recourse as they face an outcome that no amount of public outcry can seemingly alter.

“Over a million people came out to march. In other countries the government would pay attention to that. Not in Hong Kong. Is that because the Hong Kong demonstrators are too peaceful?” said Karen Chan, a 21-year-old student who joined the overnight protest along with a group of friends. “The government is not afraid and not listening.”

Police have said they have “sufficient manpower” to deal with any threat Wednesday. Thousands of officers have been deployed and dozens of police vans remain parked on arterial roads leading up to the legislature.

Speaking after the debate was postponed, 24-year-old Benjamin Chen said “It is great that they are now taking more time to reconsider,” but added that the delay cannot be considered a victory. “I think most of the protestors will stay out on the street to wait to see how the government responds.”

Many appeared ready for a prolonged stakeout, pledging to occupy the government complex until the extradition bill is retracted.

“We will fight until the end. That is the Hong Kong spirit,” says Henry Tse, 30. 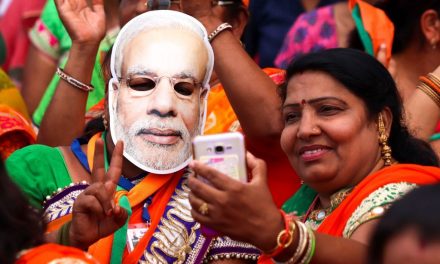 Voting Begins in the Third Phase of India’s General Election 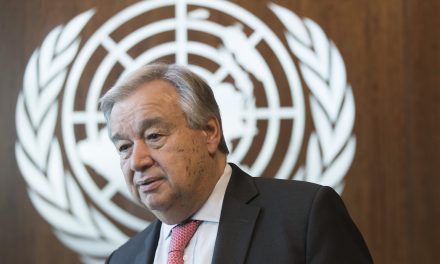 The U.N. Secretary-General Says He Has Taken a Forceful Stance on China’s Treatment of Muslims

Queen Elizabeth to Address the U.K. About Coronavirus Pandemic in Rare Public Video 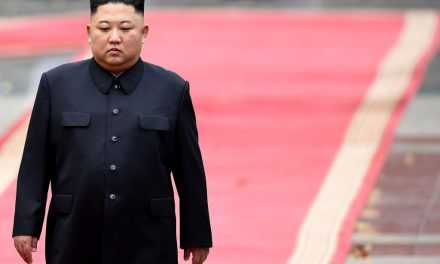